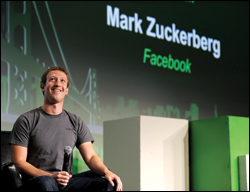 Silicon Valley loves its little surprises, almost as much as Hollywood hates them. So it’s shocking to me that recent algorithm tweaks by Facebook and YouTube — the consensus online pillars of any theatrical marketing campaign — washed over the entertainment industry with little fanfare and less protest.

It’s particularly surprising in the case of Facebook, which has essentially dictated the following: “We’re restricting your Facebook feed in such a way that only 15% of your fans will see the content your digital teams are paid to produce. If you want to get back to the same amount of eyeballs you had before, you can pay for that.”

The policy change is an enormous value proposition for Facebook and its anxious herd of new shareholders — and a huge challenge for Hollywood, whose top brass had been more than happy to let lower-level marketers play in that sandbox without ever really understanding what they were doing. This worked because the platform and the promise of its enormous reach were largely free.

Well, not anymore. The long-in-the-works change at Facebook is called EdgeRank, described as an “algorithm that decides which stories appear in each user’s newsfeed. The algorithm hides boring stories, so if your story doesn’t score well, no one will see it.”

One way to defeat EdgeRank is to make more engaging content, but let’s face it: “engagement” is the digital-marketing holy grail of the moment, so simply striving harder in that direction is hardly a solution to this new problem. The workaround is to purchase a “sponsored” post, which Facebook will make sure hits all fans’ timelines, however boring it may be.

For a mid-sized blog with Facebook fans in the tens of thousands, that can cost $200 per “sponsored” post. For a movie or studio supporting multiple films’ pages, which have considerably more friends and often post several times per day, that can turn into real money, real quick.

“For brands, one of the most interesting product offerings we have is Reach Generator, which ensures that every single one of your page posts reaches all of your fans,” said Facebook’s ads product director Gokul Rajaram in an interview published last month. “Organically, you get anywhere from 15% to 20% of your fans … in order to reach the remaining 80% to 85%, sponsoring posts is important.”

Riiight. It’s as if Mark Zuckerberg erected a tollboth on all but one lane of the 405, then sent Rajaram out to explain that Driving Access is an “interesting product offering” and that “paying the toll is important” if you want to get to work on time.

Facebook can do whatever it wants, of course; Hollywood marketers were already turning their backs on Facebook ads for theatrical releases, believing them to be ineffective and difficult to justify. But something feels very bait-and-switch about charging studio marketing departments — which have already spent resources to engage fanbases who actively consent to see their updates — additional money just to get the same exposure as before.

For those with the means, there’s a bright side: Making sure social media campaigns are always paired with ads can help brands cut through clutter. Facebook users are engaged with a very high number of pages now, and a promoted post puts you squarely at the front of the line.

The big studios can, and probably will, adjust their P&A spending to include paying for Facebook’s Reach Generator. But for indies, which rely heavily on social media for awareness in lieu of massively expensive TV ads, paying the toll will be too heavy a price. They’re just going to have to get better at interacting with fans the hard way.

There’s a silver lining there, too, albeit a faint one: Content will have to be stickier than ever to increase virality. With Facebook setting a false benchmark of 15% interaction, exceeding that organically means you’re doing something really right. Hooray for you! (Sad trombones).

It also means, however, that poorly received online content will fade much faster.

That definitely goes for YouTube, whose own algorithm change was simpler, but with a more nuanced result: Videos now rise in search ranks based on time viewed. It’s a distinct shift away from the old model of rewarding total clicks and likes, with the intent being to cut down on gimmicks. (Tagging your band’s video as “Justin Bieber in Spandex!” may get people to click, but they won’t hang around long, which will sink it the new search environment.)

That’s mostly good news for movie trailers and clips, which have a high retention rate already. That is, until Google and YouTube figure out how to erect a tollbooth around those, too.